History reveals how ancient Egyptians used flowers through their paintings and bas-relief sculptures.  The bounty of the Nile River provided abundant vegetation and resources for prosperity, while pantheistic belief in multiple gods, each with its own realm of nature, created a stable system of strict religious rituals.  The Egyptian culture inspired craftsmanship, but not creativity, as change was forbidden for 3,000 years.  Decoration and personal adornment, religious ceremonies, and the afterlife were all important parts of ancient Egyptian life.

Resurgence of interest in ancient Egypt emerged during the Napoleonic invasions in 1798-1801. French scholars coined the term ”Egyptology” and delved deeply into Egyptian culture.  The discovery of King Tut’s tomb in 1922 fueled another period of increased interest in Egypt, which is reflected in Art Deco art and architecture. 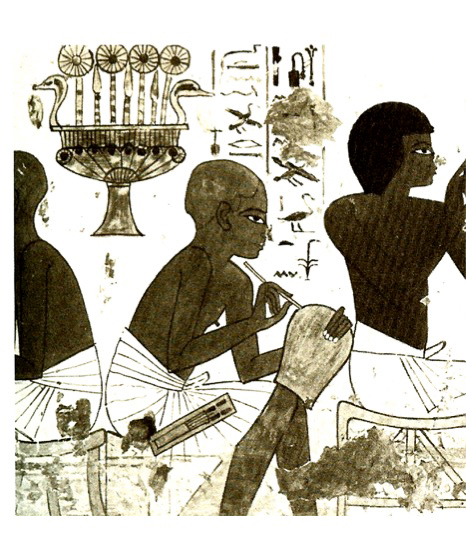 A painting from the tomb of Two Sculptors from Thebes shows an ornate bowl with lotus blossoms placed in a stylized, frontal manner.  The picture inspires today’s parallel floral designs. 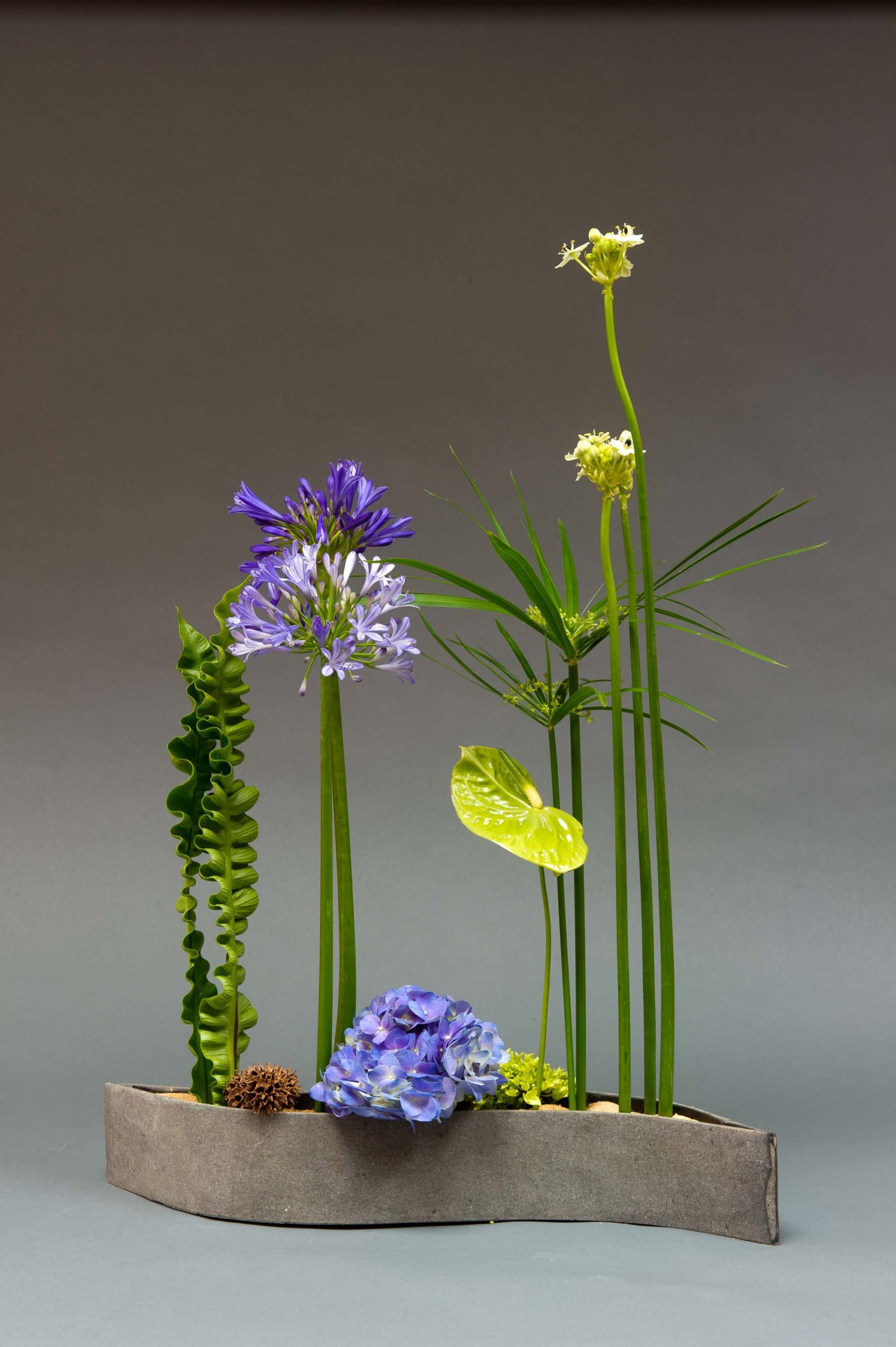 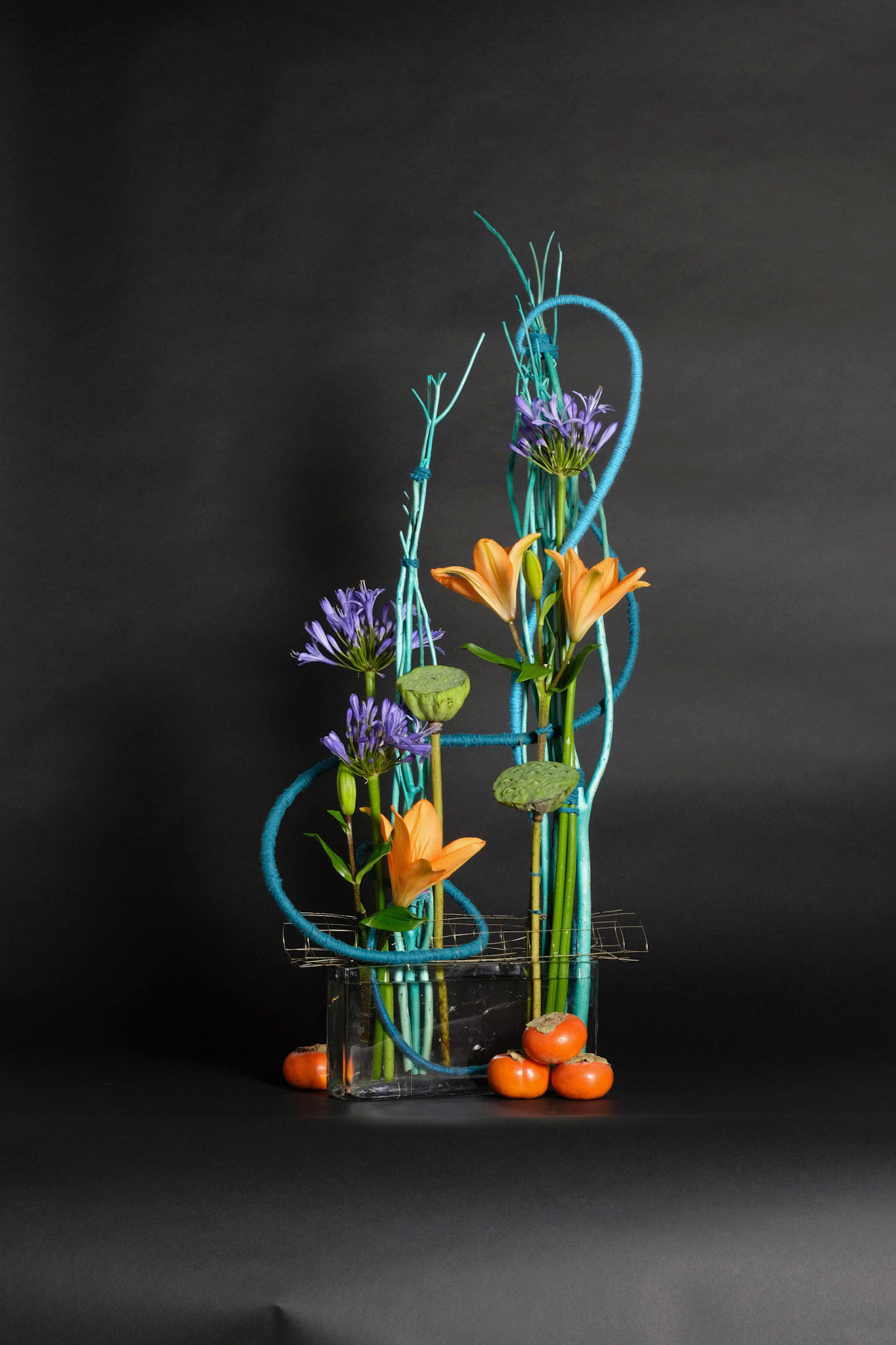 The Nile River carried alluvial gold deposits to the Eastern Desert, where ancient Egyptians mined the gold and used it for jewelry and decorative adornments.  This precious metal was thought to be “the skin of the gods,” specifically Ra (the sun god), and was used in coffins and vessels which were buried in tombs.  In early history, only pharaohs and kings used gold jewelry and personal adornments.  In later years, priests and other members of the royal court were allowed to use gold in their adornments. 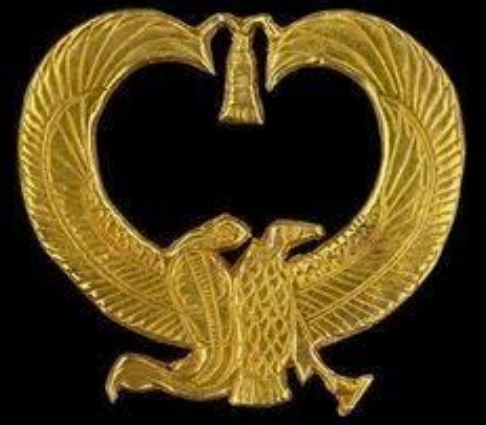 A gold necklace from King Tut’s tomb is a sample of his vast collection of jewels and riches. Egyptians believed that material goods, food, and water were needed to continue in the afterlife. 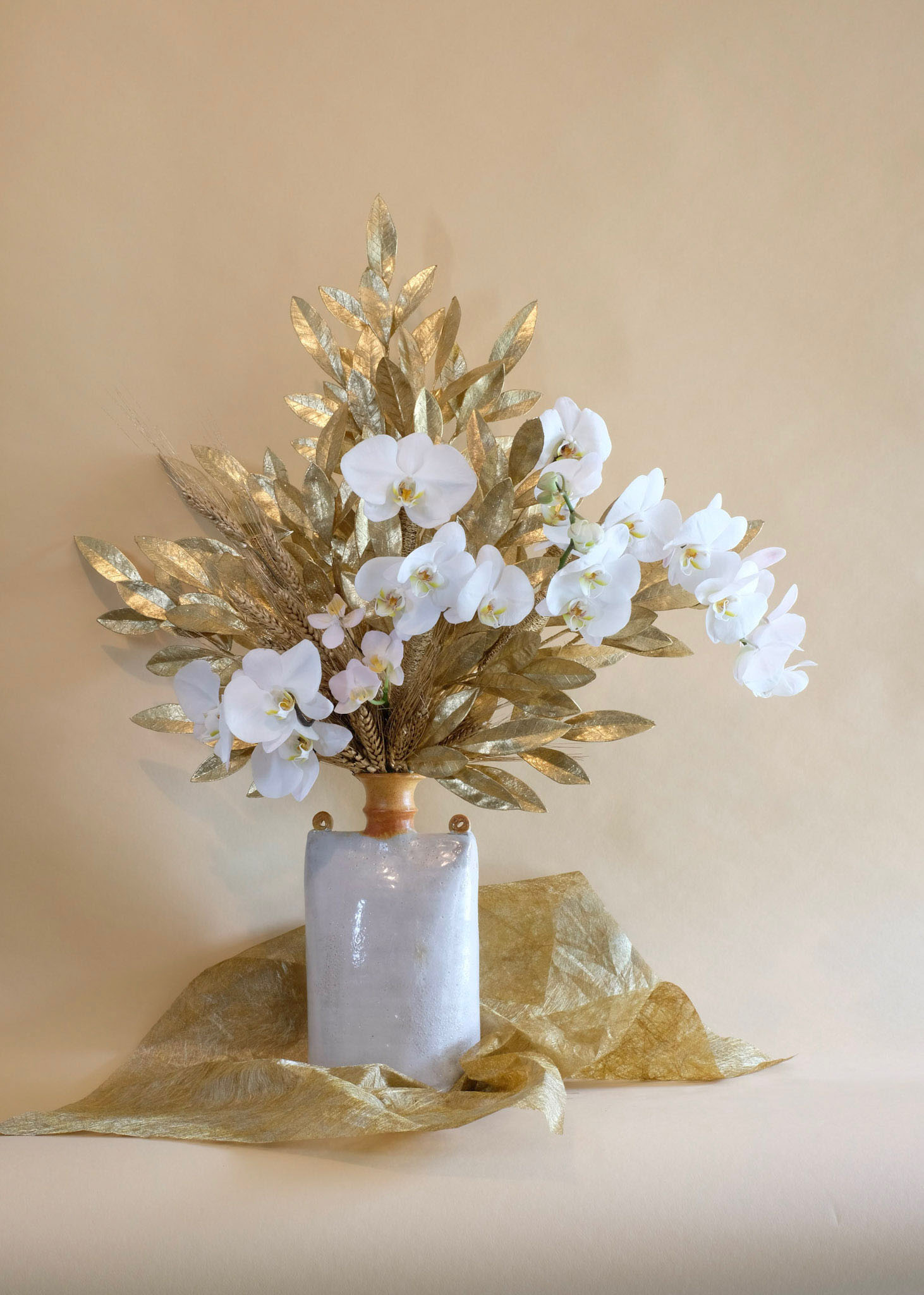 Gold painted leaves and white phalaenopsis orchid blooms interpret the opulence and two-dimensional quality of Egyptian jewelry. Water tubes for the orchids are covered in gold cording and golden wheat is added for subtle contrast. The spouted vase is reminiscent of spouted vessels used to carry water and other liquids. 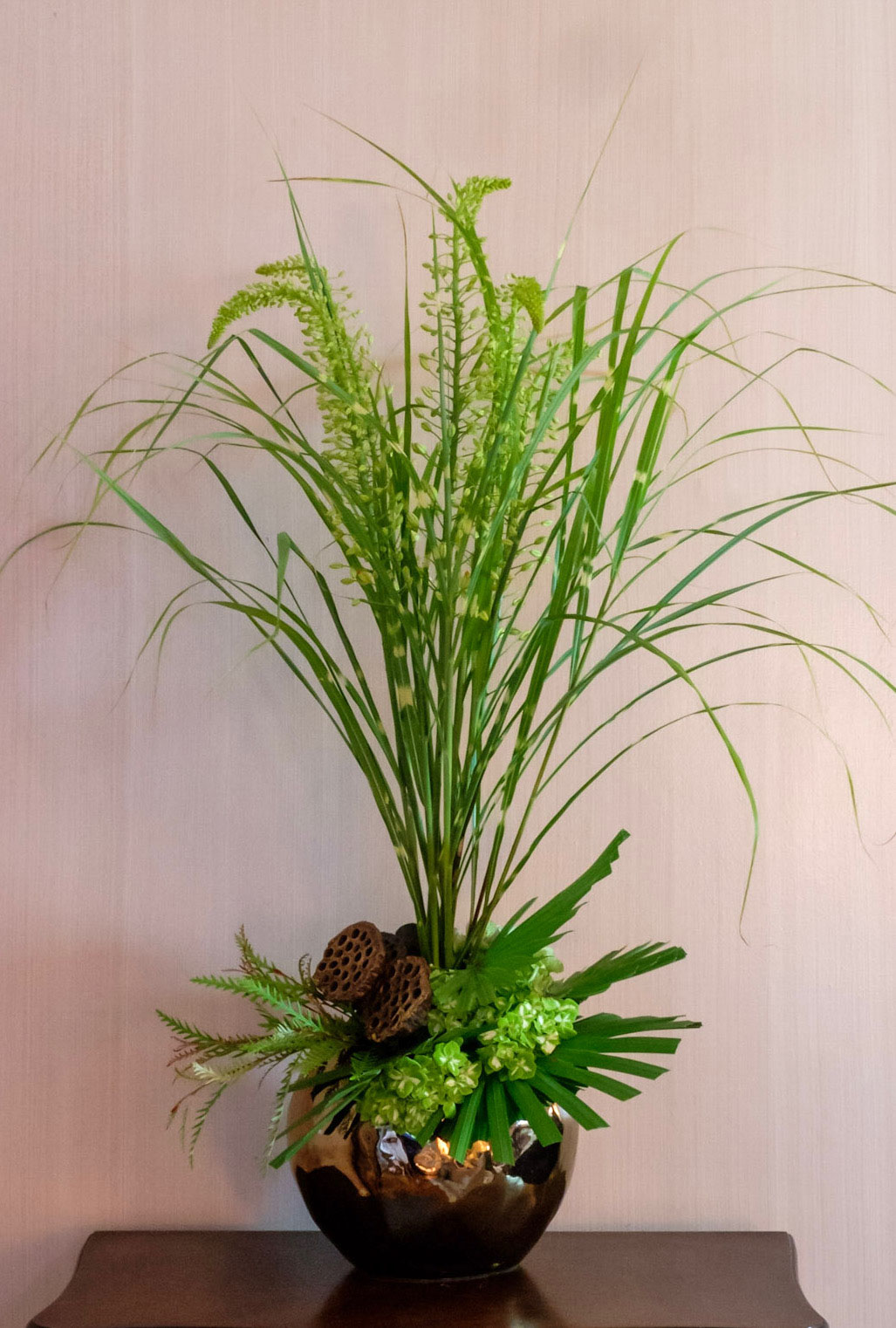 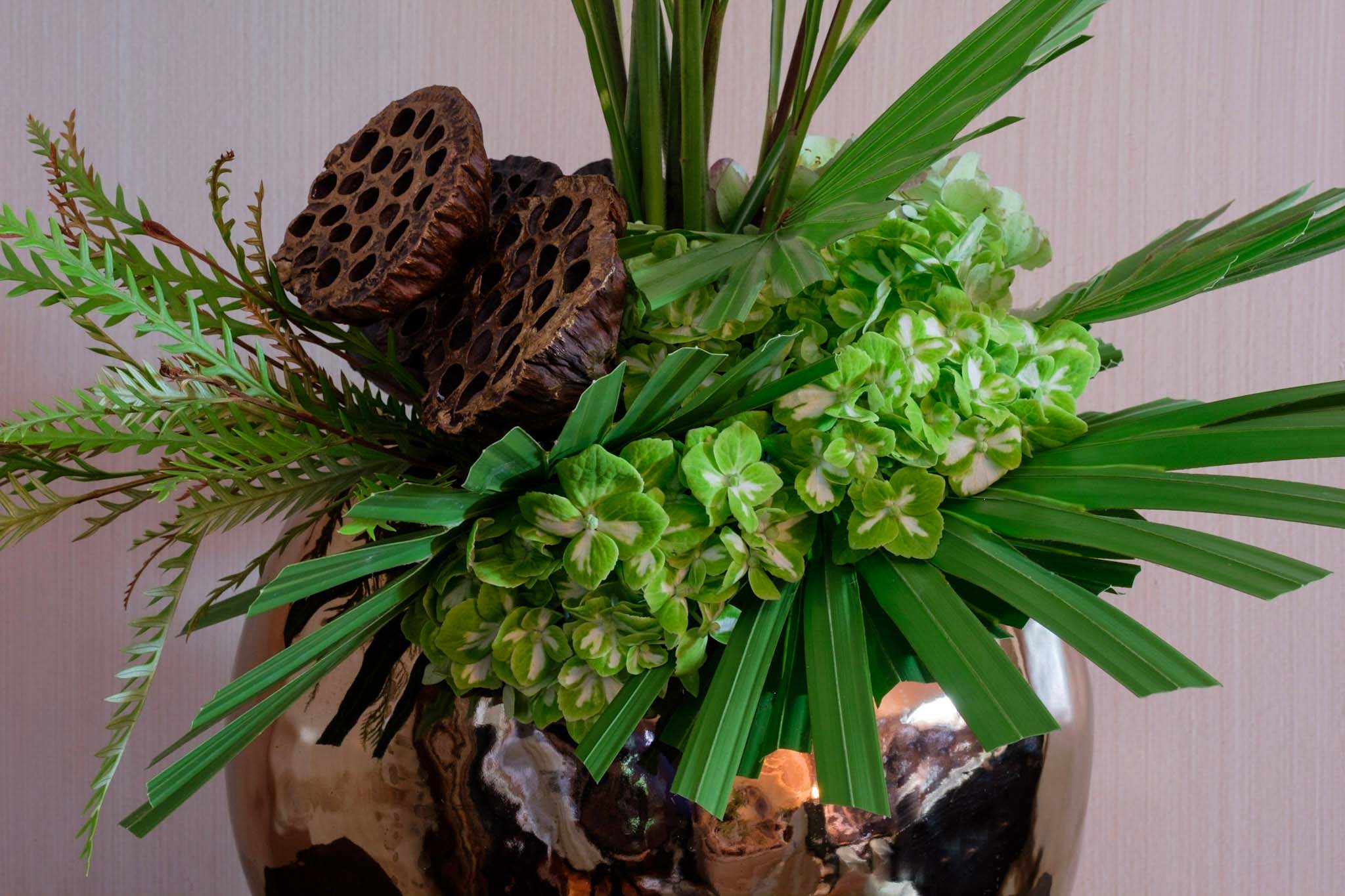 An interpretation of Egyptian spirit is captured with cut palm leaves, zebra grass, golden eremurus, and lotus pods, the sacred flower of Egypt. This design makes me think of the biblical story of Moses in the bulrushes. Close up shows layers of palm and hydrangea with lotus pods and a sprig of grivillea.

Inspiration from floral design history has been a fascination for me since my very first introduction to it in class at Longwood Gardens. Now that I am teaching at Longwood I continue to incorporate history design history into my classes.